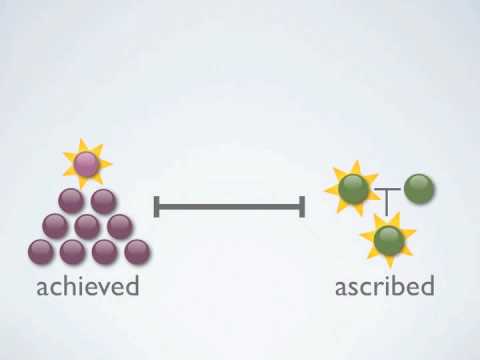 ‘Ascribed’ is the status that someone is born with and has no control over such as race, colour, social class etc.

For e.g. the status of being a student, an employee or even being referred as a romantic partner is an achieved status.

Religion is generally perceived as an ascribed status but for those individuals who choose a religion as an adult, or convert to another religion; their religion becomes an achieved status.

Now, list the social statuses you occupy as a Friend, Student, and Teammate which ones are ascribed, and which is achieved?

Whatever its type, every status is accompanied by a role, which is the behaviour expected of someone – and in fact everyone – with a certain status.

What roles are you expected to play as a consequence of the positions you occupy? How do you resolve possible role conflicts in your personal and professional life?

A ‘low’ ascribed status can result in a ‘high’ achieved status and vice-versa. A negative self-image may stifle an individual’s efforts to acquire a certain achieved status.

Stephen Covey once said “How different our lives are when we really know what is deeply important to us, and keeping that picture in mind, we manage ourselves each day to be and to do what really matters most.”

In a nutshell, I believe that a Character cannot be developed & or achieved in ease and quiet & it also does not take much strength to do things, but it requires great strength to decide what to do, how to do and when to do.